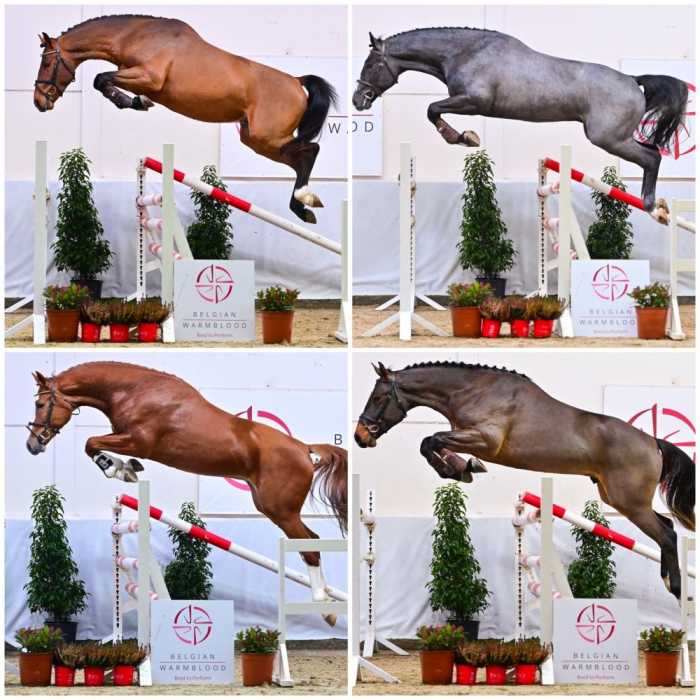 On January 15, 2022, the closing day of the 2nd phase of the BWP stallion approval, BWP will present the BWP Top Stallion Auction. This auction will take place in the equestrian center Azelhof, although without an audience due to anti-Corona measures. Don’t worry, dear friends, because this top event can be followed in its entirety via ClipMyHorse. Bidding during the Top Stallion Auction will be possible both by telephone and online (www.bwp.auction), more details about this later in this article. On January 15, you can bid online from 10 a.m. The final auction will start at 7.30 p.m.

Through the Top Stallion Auction, BWP opens the door to proven, exclusive performance blood. Come in and enjoy the success.

Health, which is not unimportant for a sports career, is an issue that BWP always takes to heart. The stallions that will be sold during the BWP Top Stallion Auction have passed the first phase of the BWP stallion approval. This is the proof that they meet the strict requirements of the veterinary examination. The stallions registered for the auction must meet an additional requirement: they need to pass successfully the second day of the second phase in order to participate at the auction.

The complete collection is online at www.bwp.auction. If you are considering purchasing one or more stallions, do not hesitate to seek commercial advice from Sven Bols (+32 495 551 405) or Tom Van De Vijver (+32 476 442 185). For questions regarding organization and administration, please contact Lieve De Greeff (+32 497 538 982). Veterinary advice from Prof. Frederik Pille can be obtained on simple request by sending an e-mail to info@bwp.be.

In this article we will review the registered stallions in random order. Anyone who wants to invest in a son of the 1m60 GP stallion Uncanto di Villagana combined with a dam from the BWP lineage of the Olympic horse Don Juan van de Donkhoeve should definitely make an offer for Top Boy van den Heuvel. His dam, Wynona van de Donkhoeve, produced Belano VD Wijnhoeve (5*, 1m60 level) and Enjoy VD Wijnhoeve (1m45 level). Wynona’s dam is known as the dam of the international performers Utopia and Wizard van de Donkhoeve. Did you know that Don Juan van de Donkhoeve, with whom Jessica Springsteen won team silver at the Olympic Games in Tokyo, also belongs to this BWP dam line 61?

How often do you get the chance to buy a son of the promising BWP Young Stallion Award winner Nixon van ’t Meulenhof out of one of the best dam lines worldwide, the Qerly Chin lineage? The BWP Top Stallion Auction offers you this opportunity. We are talking about the stallion Tolkien VGW. His sire performs under the saddle of Jos Verlooy. Tolkien VGW’s dam, Libelle de Muze, was finalist at the Belgian Championship for 5-year-olds, finalist at the Belgian Championship for 6-year-olds and finalist at the World Championship for 7-year-olds. She has already collected several top ten places in 1m40 to 1m45 classes in the international 4* circuit. Her dam performed at 1m50 level, followed by a succession of no fewer than four successful dams from the international 1m60 circuit, being Boyante de Muze, Narcotique de Muze II, Qerly Chin and Kerly.

On which marketplace can you buy a son of Balou du Rouet out of the BWP lineage 9? Indeed… during the Top Stallion Auction of the best showjumping studbook in the world, BWP. The dam of the auction stallion Timon VD Begijnakker, Hymne VD Begijnakker, produced Olaf VD Begijnakker (ex aequo winner of the cycle for 5-year-olds in 2019) and the approved stallion Da Vinci VD Begijnakker. Hymne is a half-sister to the outstanding showjumper H&M Challenge VD Begijnakker with whom Rik Hemeryck and Ludo, Olivier and Nicola Philippaerts performed worldwide for years at the highest level.

This auction collection also includes a second stallion with the suffix ‘van ‘t Kattenheye’, namely Taloé-K van ’t Kattenheye. His sire, Taloubet K, performed brilliantly at the highest level for many years. Taloé-K is related to Carthago through his dam line. Taloé-K’s dam, Zoë-K van ’t Kattenheye, remained clear as a 5-year-old in all cycle heats in which she participated and as a 6-year-old was finalist at the Belgian Championship in Gesves and finalist at the World Championship in Lanaken. Zoë-K’s granddam is a full sister to the multiple Olympic stallion and top progenitor Carthago.

Exceptional Call JW has a pedigree that is ‘exceptional’ to say at least. Eamus de Hus (°2014), the sire of Exceptional Call, performs at 1m40 level and is a son by HH Conrad with whom Grégory Wathelet wrote history. Exceptional Call JW’s granddam, the international sports dam Call Me de Muze, produced the approved stallions Cuba Libre de Muze and Easy Call de Muze. Her dam Ratina Gamma is a clone of Ratina Z. Ratina won individual silver and team gold medal at the Barcelona Olympics, team gold at the Atlanta Olympics. Moreover, she won the Grand Prix of Aachen, individual and team gold at the European Championship in Mannheim, etc.

If you want to invest in a son of the successful 5* GP stallion Grand Slam VDL (ex-Lucky Won V/H Bevrydthof), don’t hesitate to make an offer for Oreo W. Oreo W is also interestingly bred on the dam’s side. This breeding family includes several performers from the 1m60 circuit, including Veni Vidi Vici (5*) and Lois-Lane (with whom Wiljan Laarakkers ranked for instance 3rd in the GP of Madrid, 2nd in the 4* Nations Cup in Copenhagen and 3rd in the 5* Nations Cup in Gijon).

O’Neill VDL’s sire, Harley VDL, is a son of Heartbreaker out of a Carthago mare who successfully performed at 1m50 level. After a successful sports career (under the saddle of the Irish Jessica Kürten), Harley VDL became a supplier of excellent showjumpers. Several international showjumpers make part of O’Neill VDL’s dam line, amongst them Nordic van de Fruitkorf, Canisha (Maikel van der Vleuten), Quinta and Laddison (both: 3*, 1m50 level) and the 4* showjumper Acapulco.

Tcicero van Scherpen Donder is the result of crossing the progenitor Cicero van Paemel with the BWP elite dam Gitta van Scherpen Donder. According to the database of the KBRSF, as a 7-year-old, Gitta participated at 1m35 classes, in partnership with Olivier and Jules Van Roosbroeck. To Tcicero’s dam line also belongs Hope Van Scherpen Donder, with whom Abel Saïd was very successful in the international 4* and 5*-circuit, including winning the World Cup classes in Abu Dhabi and Verona.

From the dam line of the 1m60 showjumper Aimee, one can buy a son of Quint VH Maarlo, namely Tequilano VH Maarlo. Quint jumped successfully at international 1m45 level. A son of him was already sold during the BWP Top Stallion Auction: Oscar The Homage (€ 57.000). Tequilano’s dam, Chi-Mara, produced Quilano V/H Maarlo, who was selected to participate at the 3rd phase during the 2019 BWP stallion approval. Chi-Mara’s dam signed for the motherhood of Aimee (1m60 level, Peter Wylde) and Tiramisu Z (1m50 level, Trapp O’Neal).

Turbo VL unites top performance blood in his pedigree. His sire, Mr Uno-K van ’t Kattenheye (°2012), performs at international 1m40 to 1m50 level, in partnership with Nicola Philippaerts. Via his dam, Turbo VL carries the coveted performance blood of Cornet Obolensky and via his granddam that of the BWP ambassador Lys De Darmen, a ‘dam maker’ who we often find in the dam line of 5* GP and even Olympic horses.

Indouglas van het Bevrijdthof (alias Dallas VDL, a grandson of the BWP ambassador Darco) signed for the paternity of Tristan van het Klokkenhof. Under the saddle of Jur Vrieling, Indouglas performed outstanding in the five-star circuit. Tristan’s dam is by Numero Uno, a KWPN ‘Preferent’ stallion who is highly regarded in the world of top showjumping. Quina van het Klokkenhof, Tristan’s granddam, is a BWP elite dam, with whom Davy Lannoo and Bart Bomere have jumped.

Anyone who wants to make a bid for one or more auction stallions during the live auction (without an audience) can do so online via www.bwp.auction. It is also via this website that you must register in advance. Don’t take any risks and register today. Bidding by telephone is also possible. For this you must register in advance with the auction team. Contact Mrs. Lieve De Greeff before the auction and inform her of which stallion you are interested in. When the stallion of your choice is auctioned, you will be contacted by telephone by someone from the auction team.

Invest in the stars of tomorrow through the BWP Top Stallion Auction!